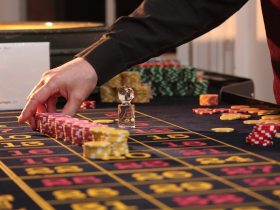 You must be familiar with the layout of the craps tables in order to understand the game and create a winning strategy.

Standard design for land-based casinos is three and a quarter feet wide by twelve foot long (3.5×12). The table is made of heavy wood and has a leather arm rail. This section has a larger cutout to allow for boxman and two dealers standing. On the opposite side, a smaller section is cut out to accommodate the stickman.

The 22 sections that are available to hold their chips in land-based casinos could theoretically allow for 22 players at the craps table. There are usually between 14-18 players at a craps table.

Layout of the Craps Table

Craps tables are intimidating to novice players. Some even avoid them altogether. Craps tables are often a major turnoff for players. The game of craps has high odds of winning if it is played correctly.

It is easier to understand the layout if it is broken down into smaller sections and sections. Players should keep in mind that the craps layout was created to lure casino customers into placing wagers with a high house edge.

Players need to be aware that proposition bets placed in the middle of the table favor the house.

The standard layout of a craps table is the same in brick-and-mortar casinos as it is online. It consists of two identical sections. This is the so-called side and center sections.

Each dealer manages the side sections. This is why there are two dealers standing at the table. It doesn’t matter at which end a player chooses to place a bet, because all sides are identical . The stickman manages the middle section of the craps table.

Whatever the position of the players at the table, the only section that applies to them on the layout is the side section at customer’s end. The center section is shared by all players on both sides of the table. However, the only place they can wager on is the one at their end.

The craps table layout has two sections: the self-service and dealer areas. A blank area is called the “apron”. Each of these areas also offers a range of betting options.

In the self-service section of the side section, you can place several bets such as Field, Don’t Pass and Pass Line. Some layouts may also include the Big 6 and the Big 8 bets . These bets are so large that many players won’t even consider placing a wager on them, and they are not part of all craps table layouts.

These six bets are what is known as the player’s area. Customers are permitted to manage these bets independently. Players must place their chips into the block to make one. If they win the Pass, Don’t Pass or Field bet, the dealer will place the winnings to the player’s original wager. However, it is the responsibility of the player who must pick up the chips.

The staff at the craps table will assume that players have pressed up their bet with the original amount and the winnings.

The dealer’s area also includes six square boxes with the numbers 4, 5, 6, 8, 9 and 10. These boxes are also known as “point boxes”. The dealer places the puck in the “on” position at the center of the point box corresponding to the point number when a player wins. The dealer can also use the point boxes to place bets on the player. The dealer cannot allow players to place or pick up bets in his area.

All players, regardless of their position at the table, share the Centre Section of the craps table layout. The stickman handles the central section, which contains the so-called proposition wagers. Players cannot operate in this area by themselves. They must get the attention of the stickman in order to place a proposition bet.

In a brick-and mortar casino, players can place their bets by placing their chip on the middle of the table and telling a stickman what kind of bet they want to make.

If the stickman is too busy with other players’ wagers, the player can place their chip in the apron. Then the dealer could announce the bet. The dealer can then either place the chip in the middle section or wait for the stickman’s bets to complete before telling the player what bet they want.

If you play in a land-based casino, there will be eight craps tables. This area is known as the “pit” and gives the casino staff maximum control over the eight tables. The pit is not permitted for players.

The interesting thing about craps table staff is that there are many types of dealers. There are four dealers: one standing dealer, a boxman and one seated.

One distinctive feature of the craps table staff at brick-and-mortar casino is that they switch their positions around every twenty minutes during their eight-hour shift. This rotation does not interrupt the game and is a standard practice for land-based casinos. This issue is not present when playing at an online casino.

The floorman is the general manager for everything at the table . The floorman can supervise multiple tables at once. They have the authority to approve credit for players and can also observe players for inappropriate conduct.

The boxman is actually not part of the crew. He sits with his back against the pit and watches the action at the craps tables. He watches the dealers and monitors the bankroll of the casino during a particular game. It is also responsible for changing chips to cash and observing what happens at the table.

The boxman can mediate and settle any dispute between the dealer and the player over the game. These players must be fair when settling disputes using the standard rules for play.

Because of their long flexible sticks they use to move the dice around the table , the stickman is called such.

Players around the table should be reminded by the stickman that they have the option to place proposition bets in the middle of the table. The stickman organizes the chips. They direct the two standing dealers in order to pay the winnings from center bets.

As mentioned previously, each craps table has two standing dealers one on each side. They interact with and communicate directly with players at the craps table and pay out and collect all bets placed on each half of the table. The two dealers have the following responsibilities: they must organize all bets, collect loser bets, and pay out winnings to the correct players quickly and accurately.

Both sides of the craps table layout look identical so it doesn’t matter where they are. Any question that players may ask the dealers over the game will be answered by them.

To begin playing, a player must either deposit cash at the craps table or request credit if they have any at the casino. After a credit investigation, credit must be granted at the casino.

After the credit has been approved and all documents have been signed and set, the player can start the game. The dealer will give the player the correct number of chips.

The dealers can advance the players’ chips if they are not asked for credit. This happens after the player has placed the money in the COME box. Dealers cannot receive or give cash or chips directly from players. They use the COME box to do this. The casino bankroll is then counted by the boxman who counts the money. The dealer will then give the chips to the player.

Players are not required to “check-in” at a particular table when playing in a land-based casino. They can simply walk up and place their chips at a betting station. Players are free to leave the table after determining whether the bet was a winner or a loser. This process applies only to regular land-based casino games. Playing at online casinos is much easier .

To ensure that the dealer does not roll a “point number”, he would need to place the Marker Puck disc in the correct point number box. If a game is ongoing, the disk should be placed with its “onside up” side facing towards the dealer. If the disk is placed on its “off” side and the table is in between games, it is indicated that a game is ongoing. The dealer will usually place the disk in the “don’t come” box.